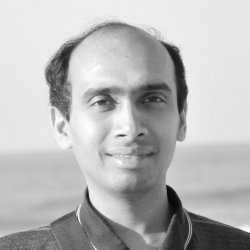 Prof. Nishanth Sastry is Co-Lead of the Distributed and Networked Systems Group in the Department of Computer Science, University of Surrey. He is also a Visiting Researcher at the Alan Turing Institute, where he is a co-lead of the Social Data Science Special Interest Group.

Prof. Sastry holds a Bachelor’s degree (with distinction) from R.V. College of Engineering, Bangalore University, a Master’s degree from University of Texas, Austin, and a PhD from the University of Cambridge, all in Computer Science. Previously, he spent over six years in the Industry (Cisco Systems, India and IBM Software Group, USA) and Industrial Research Labs (IBM TJ Watson Research Center). He has also spent time at the Massachusetts Institute of Technology Computer Science and AI Laboratory.

His honours include a Best Paper Award at SIGCOMM Mobile Edge Computing in 2017, a Best Paper Honorable Mention at WWW 2018, a Best Student Paper Award at the Computer Society of India Annual Convention, a Yunus Innovation Challenge Award at the Massachusetts Institute of Technology IDEAS Competition, a Benefactor’s Scholarship from St. John’s College, Cambridge, a Best Undergraduate Project Award from RV College of Engineering, a Cisco Achievement Program Award and several awards from IBM. He has been granted nine patents in the USA for work done at IBM.

Nishanth has been a keynote speaker, and received media coverage from print media such as The Times UK, New York Times, New Scientist and Nature, as well as Television media such as BBC, Al Jazeera and Sky News. He is a member of the ACM and a Senior Member of the IEEE.

26 June 2020
2020
Can the US stop Huawei’s expansion?
Panelist on Inside Story programme
Al Jazeera International
14 July 2020
2020
Who is responsible when surveillance technology is misused?
Panelist on Inside Story programme
Al Jazeera International
06 March 2021
Google says it won't stalk you across the web with cookies. Experts think it's a clever ploy to consolidate its ads empire.
Expert Comments
Business Insider
18 May 2021
Android 12 will have more precise privacy controls, but experts aren't fully convinced
Expert comments
Android Central
25 May 2021
Detecting Hate Online (Article in New Statesman Spotlight on Cyber)
Author
New Statesman

My work focuses on the structures and architectures used for disseminating and consuming content online. This encompasses a range of topics both at the infrastructure (computer networks) and people (social networks) levels. My long-standing approach has been to apply the lens of data analysis to large, real-world data sets of social networks and computer networks, and using the patterns gleaned therein to design and develop better systems and architectures that are "fit-for-purpose" in deployed or deployable systems. This highly empirical approach, which may be termed "Internet Data Science", has allowed me to work with partners such as BBC R&D, Vodafone R&D and Cisco Systems, as well as drive social and public policy impact, with public bodies and organisations such as the UK Parliament, Wikimedia Foundation and the Samaritans:

In all the above, "we" refers to me and the group of talented hardworking students and postdocs with whom I collaborate. If this sort of research sounds interesting, and you would like to work with me, feel free to send me an email, mentioning "life=42" to indicate you have read through this text.

I am looking for PhD students. Please read my research and my publications, and if the topics sound like something you might want to work on for 3+ years, please get in touch!