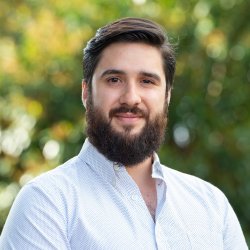 In 2018 I obtained a PhD in Robot Vision, and have continued to work in Robotics Research. I am currently a Research Fellow at the University of Surrey. I am interested in the fields of Robotics, Computer Vision and Deep Learning. I’ve spent many years developing and building real-time robotic systems that can leverage the advances of Deep Learning to perform difficult computer vision tasks such as SLAM, 3D Reconstruction and Multi-View Geometry. I am also interested in collaboration and automation between robotic agents, specifically emergent behaviours that are not hard-coded into systems. 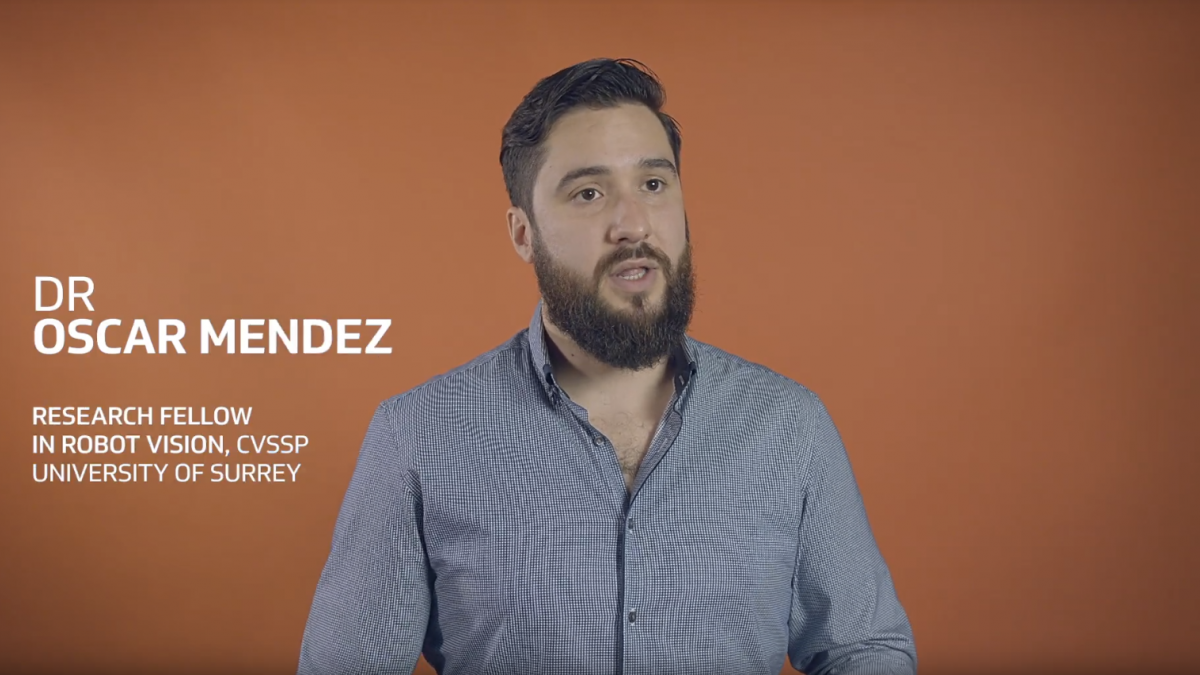 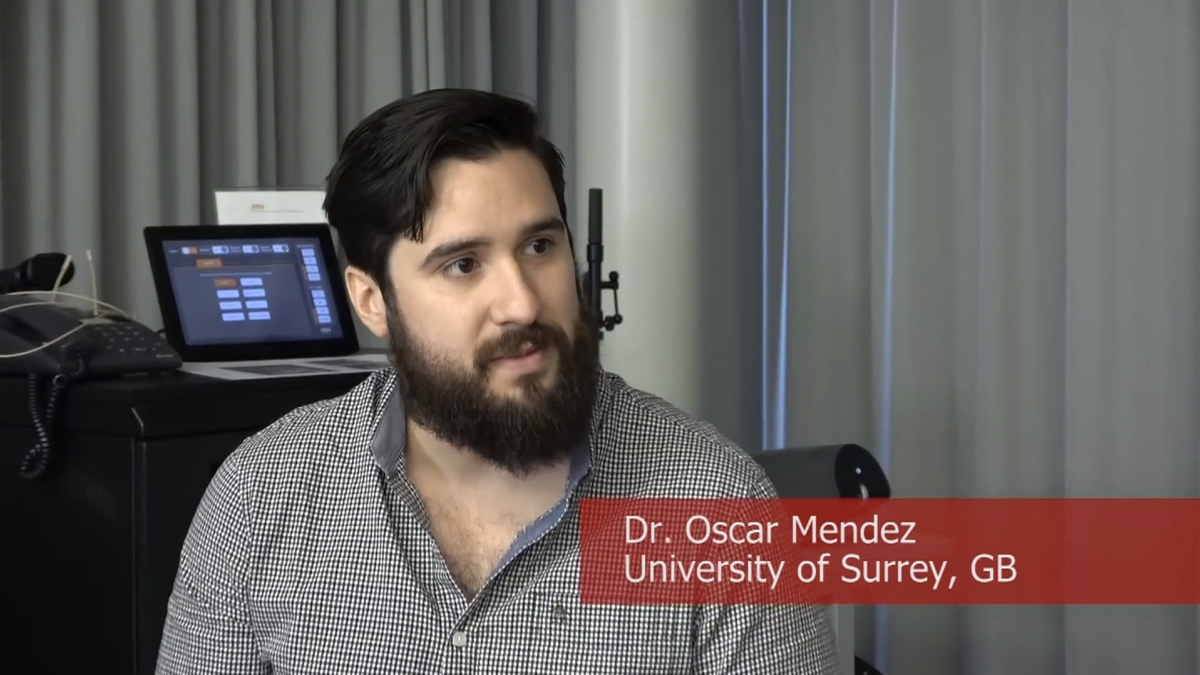 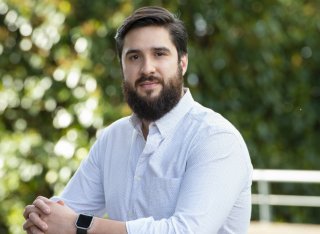 I am interested in the fields of Robotics, Computer Vision and Deep Learning. I’ve spent many years developing and building real-time robotic systems that can leverage the advances of Deep Learning to perform difficult computer vision tasks such as SLAM, 3D Reconstruction and Multi-View Geometry. I am also interested in collaboration and automation between robotic agents, specifically emergent behaviours that are not hard-coded into systems.

As autonomous cars start to become a reality, one of the unanswered questions remains – where and how will those cars park?

Autonomous Valet Parking (AVP) is functionality which allows a driver to be dropped off in a multi-storey car park or their final destination and the vehicle to then park itself autonomously.

Estimating the vehicle’s current position is more difficult in multi-storey carparks where GPS signals cannot be received, which means that the vehicle must rely on other sensors and localisation based on visual objects and features present in maps. This is an open problem in the automotive industry which must be solved to enable SAE Level 4 AVP deployment.

This consortium’s key objective is to identify obstacles to full deployment of AVP through the development of a technology demonstrator. It aims to achieve this goal by:

Scalable Multimodal sign language Technology for sIgn language Learning and assessmEnt (SMILE)
The goal of the project SMILE is to pioneer an assessment system for Swiss German Sign Language (DSGS) using automatic sign language recognition technology. To achieve this goal, this project uses a multidisciplinary framework that follows two strands of research, one on sign language technology and one on sign assessment with a common link to sign language linguistics. The project consortium consists of three partner institutes with complementary expertise: 1. The Idiap Research Institute (Martigny, CH) will coordinate the project and will contribute to the project by developing a novel automatic sign language assessment and feedback approach taking inspirations from a speech recognition approach that was developed under SNSF project FlexASR. 2. The Hochschule für Heilpädagogik (HfH, Zurich, CH) will bring its expertise in sign language assessment and sign linguistics (through collaboration with Center for Sign Language Research, Basel). In addition, the HfH will play a central role in connecting the real world of L2 learners and the Deaf community in German Switzerland to the project. 3. The University of Surrey (UK) will bring to the project its longstanding expertise in sign language technology, visual data acquisition and computer vision, and in particular its wide experience in state-of-the-art sign language technology research through European-level projects such as DictaSign.

Oscar Mendez Maldonado, Simon Hadfield, Nicolas Pugeault, Richard Bowden (2018)SeDAR – Semantic Detection and Ranging: Humans can localise without LiDAR, can robots?, In: Proceedings of the 2018 IEEE International Conference on Robotics and Automation, May 21-25, 2018, Brisbane, Australia IEEE
DOI: 10.1109/ICRA.2018.8461074
How does a person work out their location using a floorplan? It is probably safe to say that we do not explicitly measure depths to every visible surface and try to match them against different pose estimates in the floorplan. And yet, this is exactly how most robotic scan-matching algorithms operate. Similarly, we do not extrude the 2D geometry present in the floorplan into 3D and try to align it to the real-world. And yet, this is how most vision-based approaches localise. Humans do the exact opposite. Instead of depth, we use high level semantic cues. Instead of extruding the floorplan up into the third dimension, we collapse the 3D world into a 2D representation. Evidence of this is that many of the floorplans we use in everyday life are not accurate, opting instead for high levels of discriminative landmarks. In this work, we use this insight to present a global localisation approach that relies solely on the semantic labels present in the floorplan and extracted from RGB images. While our approach is able to use range measurements if available, we demonstrate that they are unnecessary as we can achieve results comparable to state-of-the-art without them.
Celyn Walters, Oscar Mendez, Simon Hadfield, Richard Bowden (2019)A Robust Extrinsic Calibration Framework for Vehicles with Unscaled Sensors, In: Towards a Robotic Society IEEE

Accurate extrinsic sensor calibration is essential for both autonomous vehicles and robots. Traditionally this is an involved process requiring calibration targets, known fiducial markers and is generally performed in a lab. Moreover, even a small change in the sensor layout requires recalibration. With the anticipated arrival of consumer autonomous vehicles, there is demand for a system which can do this automatically, after deployment and without specialist human expertise.

To solve these limitations, we propose a flexible framework which can estimate extrinsic parameters without an explicit calibration stage, even for sensors with unknown scale. Our first contribution builds upon standard hand-eye calibration by jointly recovering scale. Our second contribution is that our system is made robust to imperfect and degenerate sensor data, by collecting independent sets of poses and automatically selecting those which are most ideal.

We show that our approach’s robustness is essential for the target scenario. Unlike previous approaches, ours runs in real time and constantly estimates the extrinsic transform. For both an ideal experimental setup and a real use case, comparison against these approaches shows that we outperform the state-of-the-art. Furthermore, we demonstrate that the recovered scale may be applied to the full trajectory, circumventing the need for scale estimation via sensor fusion.

Jaime Spencer, Oscar Mendez Maldonado, Richard Bowden, Simon Hadfield (2018)Localisation via Deep Imagination: learn the features not the map, In: Proceedings of ECCV 2018 - European Conference on Computer Vision Springer Nature
How many times does a human have to drive through the same area to become familiar with it? To begin with, we might first build a mental model of our surroundings. Upon revisiting this area, we can use this model to extrapolate to new unseen locations and imagine their appearance. Based on this, we propose an approach where an agent is capable of modelling new environments after a single visitation. To this end, we introduce “Deep Imagination”, a combination of classical Visual-based Monte Carlo Localisation and deep learning. By making use of a feature embedded 3D map, the system can “imagine” the view from any novel location. These “imagined” views are contrasted with the current observation in order to estimate the agent’s current location. In order to build the embedded map, we train a deep Siamese Fully Convolutional U-Net to perform dense feature extraction. By training these features to be generic, no additional training or fine tuning is required to adapt to new environments. Our results demonstrate the generality and transfer capability of our learnt dense features by training and evaluating on multiple datasets. Additionally, we include several visualizations of the feature representations and resulting 3D maps, as well as their application to localisation.
Oscar Mendez Maldonado, Simon Hadfield, Nicolas Pugeault, Richard Bowden (2016)Next-best stereo: extending next best view optimisation for collaborative sensors, In: Proceedings of BMVC 2016
Most 3D reconstruction approaches passively optimise over all data, exhaustively matching pairs, rather than actively selecting data to process. This is costly both in terms of time and computer resources, and quickly becomes intractable for large datasets. This work proposes an approach to intelligently filter large amounts of data for 3D reconstructions of unknown scenes using monocular cameras. Our contributions are twofold: First, we present a novel approach to efficiently optimise the Next-Best View ( NBV ) in terms of accuracy and coverage using partial scene geometry. Second, we extend this to intelligently selecting stereo pairs by jointly optimising the baseline and vergence to find the NBV ’s best stereo pair to perform reconstruction. Both contributions are extremely efficient, taking 0.8ms and 0.3ms per pose, respectively. Experimental evaluation shows that the proposed method allows efficient selection of stereo pairs for reconstruction, such that a dense model can be obtained with only a small number of images. Once a complete model has been obtained, the remaining computational budget is used to intelligently refine areas of uncertainty, achieving results comparable to state-of-the-art batch approaches on the Middlebury dataset, using as little as 3.8% of the views.
Oscar Mendez, Simon Hadfield, Nicolas Pugeault, Richard Bowden (2019)SeDAR: Reading floorplans like a human, In: International Journal of Computer Vision Springer Verlag

The use of human-level semantic information to aid robotic tasks has recently become an important area for both Computer Vision and Robotics. This has been enabled by advances in Deep Learning that allow consistent and robust semantic understanding. Leveraging this semantic vision of the world has allowed human-level understanding to naturally emerge from many different approaches. Particularly, the use of semantic information to aid in localisation and reconstruction has been at the forefront of both fields.

Like robots, humans also require the ability to localise within a structure. To aid this, humans have designed highlevel semantic maps of our structures called floorplans. We are extremely good at localising in them, even with limited access to the depth information used by robots. This is because we focus on the distribution of semantic elements, rather than geometric ones. Evidence of this is that humans are normally able to localise in a floorplan that has not been scaled properly. In order to grant this ability to robots, it is necessary to use localisation approaches that leverage the same semantic information humans use.

In this paper, we present a novel method for semantically enabled global localisation. Our approach relies on the semantic labels present in the floorplan. Deep Learning is leveraged to extract semantic labels from RGB images, which are compared to the floorplan for localisation. While our approach is able to use range measurements if available, we demonstrate that they are unnecessary as we can achieve results comparable to state-of-the-art without them.

Oscar Mendez Maldonado, Simon Hadfield, Nicolas Pugeault, Richard Bowden (2017)Taking the Scenic Route to 3D: Optimising Reconstruction from Moving Cameras, In: ICCV 2017 Proceedings IEEE
DOI: 10.1109/ICCV.2017.501
Reconstruction of 3D environments is a problem that has been widely addressed in the literature. While many approaches exist to perform reconstruction, few of them take an active role in deciding where the next observations should come from. Furthermore, the problem of travelling from the camera’s current position to the next, known as pathplanning, usually focuses on minimising path length. This approach is ill-suited for reconstruction applications, where learning about the environment is more valuable than speed of traversal. We present a novel Scenic Route Planner that selects paths which maximise information gain, both in terms of total map coverage and reconstruction accuracy. We also introduce a new type of collaborative behaviour into the planning stage called opportunistic collaboration, which allows sensors to switch between acting as independent Structure from Motion (SfM) agents or as a variable baseline stereo pair. We show that Scenic Planning enables similar performance to state-of-the-art batch approaches using less than 0.00027% of the possible stereo pairs (3% of the views). Comparison against length-based pathplanning approaches show that our approach produces more complete and more accurate maps with fewer frames. Finally, we demonstrate the Scenic Pathplanner’s ability to generalise to live scenarios by mounting cameras on autonomous ground-based sensor platforms and exploring an environment.