A 50-strong bike-share scheme is being launched in Guildford thanks to the generosity of nextbike and an impressive fundraising campaign from the University of Surrey. 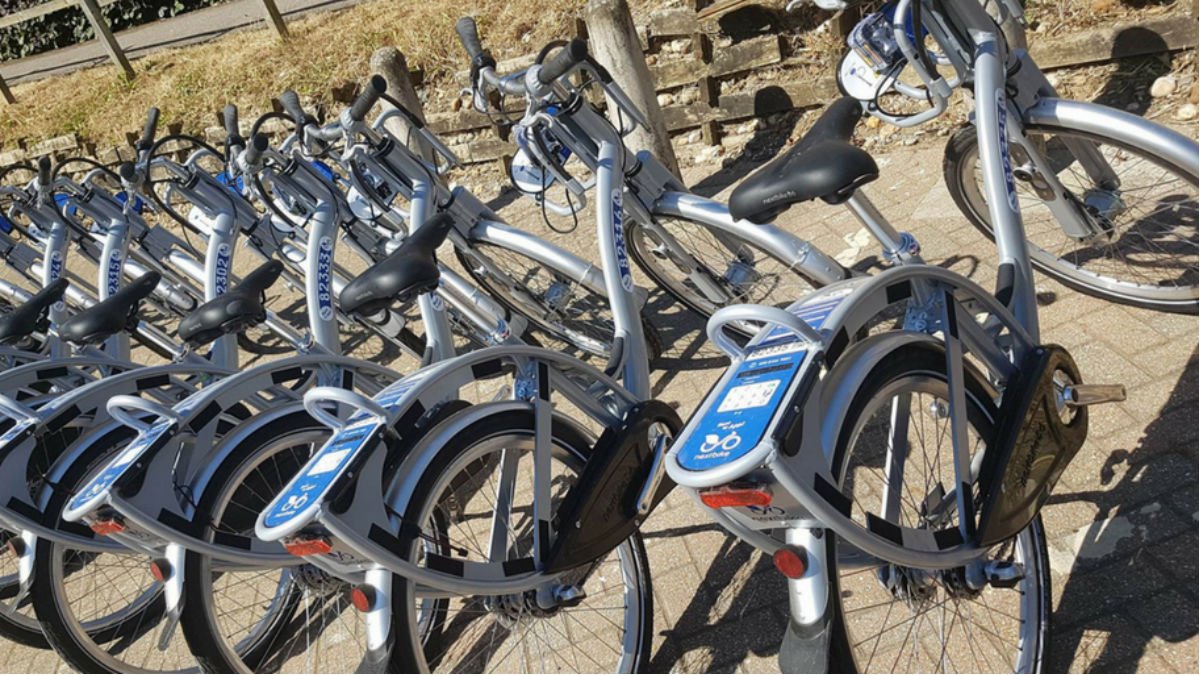 Earlier this year, the University took part in the Santander Cycles University Challenge - a competition that saw five universities competing to raise money to cover the upfront costs for a cycle hire scheme in their area worth £100,000.

The University of Surrey came fourth, raising an impressive £69,906 as part of its Back the Bike campaign – 137 per cent of the original crowdfunding target of £51,000.

While the top two universities had their capital costs for their schemes covered by Santander, bike-share operator nextbike was so impressed with Surrey’s campaign it decided to award the University a runner-up prize of £75,000. A further £25,000 from the University has turned the 50-strong cycle-share scheme with docking stations into a reality, with the potential for expansion across Guildford in the future.

Surrey’s campaign crowd was over 450 strong, with support from staff, students, local businesses and the wider Guildford community.

The scheme will also become a fundamental part of our sustainable travel plan.

University of Surrey Transport Manager, Ed Nelson, said: “We’ve all been looking forward to the launch of the scheme and we’re really excited now that it’s finally here. It’s great that our students will be able to access the many benefits that bike share brings. I look forward to working with nextbike, Santander and partners in the local business community to make this scheme a success in Guildford.”

Julian Scriven, nextbike UK Managing Director, said: “We’re delighted to be launching the University of Surrey’s scheme thanks to the phenomenal efforts from everyone involved in the campaign. It was great to see how the University and local community really got behind the Santander Cycles campaign and we hope they will continue to Back the Bike now the scheme is up and running.

“nextbikes are one of the most affordable modes of transport around, with prices starting from as little as 8p per day for students. And with the other added benefits, including improving health and reducing congestion, bike-share will be a fantastic addition to the area.”

Matt Hutnell, director of Santander Universities UK, said: “We are delighted that following on from the success of the Santander Cycles University Challenge, the University of Surrey has the opportunity to launch its cycle scheme. Our relationship with the University of Surrey began in 2008 and since then our funding has provided support to help students with entrepreneurial and business skills including a number of scholarships and SME internships.

“We are thrilled that the University and the local community will benefit from this new scheme and we hope it makes a big difference to life on campus as well as the local area.”

The scheme has also received support from Guildford Borough Council. The Sustainable Movement Corridor Project covers a package of expansions to improve routes between Surrey Research Park, Royal Surrey County Hospital and Guildford’s mainline station. The initial part of phase one of the project costs approximately £3.85m will complete by 2021.

Councillor Matt Furniss, Deputy Leader and Lead Councillor for Infrastructure and Governance, said: ‘We are committed to making it easier to travel around the borough in a sustainable way. These planned improvements on our local road networks should help solve transport issues and address local ‘hotspots’ to make it easier for people to travel around our borough. We’re working towards a future transport system which will be greener, safer and more reliable.”

He explained the Council also aim to launch their own community bike share scheme to link with and complement the University’s. He said: “The scheme will be rolled out in stages extending from the town centre with docking stations installed at key destinations across the town. We are currently in the process of carrying out targeted consultation and engagement with other cycle groups and other interested parties.”