Circuit quantum electrodynamics is a theoretical framework which describes the quantum dynamics of the qubits and electromagnetic modes.

Superconducting circuits are metallic electrical circuits based on the Josephson effect, which lose all electrical resistance at cryogenic temperatures. Their supercurrents then become quantised and enable the realisation of quantum bits (qubits). These qubits possess electric dipoles, which strongly couple to electromagnetic modes in superconducting resonators.

Simultaneous bistability of a qubit and resonator in circuit quantum electrodynamics

We studied the joint activated dynamics exhibited by two quantum degrees of freedom: a cavity mode oscillator which is strongly coupled to a superconducting qubit in the strongly coherently driven dispersive regime. Dynamical simulations and complementary measurements show a range of parameters where both the cavity and the qubit exhibit sudden simultaneous switching between two metastable states. This manifests in ensemble averaged amplitudes of both the cavity and qubit exhibiting a partial coherent cancellation. Transmission measurements of driven microwave cavities coupled to transmon qubits show detailed features which agree with the theory in the regime of simultaneous switching.

The engineering of Kerr interactions is of great interest for processing quantum information in multi-partite quantum systems and for investigating many-body physics in a complex cavity-qubit network. We study how coupling multiple different types of superconducting qubits to the same cavity modes can be used to modify the self- and cross-Kerr effects acting on the cavities and demonstrate that this type of architecture could be of significant benefit for quantum technologies.

Using both analytical perturbation theory results and numerical simulations, we first show that coupling two superconducting qubits with opposite anharmonicities to a single cavity enables the effective self-Kerr interaction to be diminished (see bottom panel of graph below), while retaining the number splitting effect that enables control and measurement of the cavity field.

In this work we demonstrated that this reduction of the self-Kerr effect can maintain the fidelity of coherent states and generalised Schrödinger cat states for much longer than typical coherence times in realistic devices. Next, we found that the cross-Kerr interaction between two cavities can be modified by coupling them both to the same pair of qubit devices.

When one of the qubits is tunable in frequency, the strength of entangling interactions between the cavities can be varied on demand, forming the basis for logic operations on the two modes. Finally, we discussed the feasibility of producing an array of cavities and qubits where intermediary and on-site qubits can tune the strength of self- and cross-Kerr interactions across the whole system. This architecture could provide a way to engineer interesting many-body Hamiltonians and be a useful platform for quantum simulation in circuit quantum electrodynamics.

Also see: The application of the Kerr nonlinearity for enhancement and tomography of squeezed states and on deterministic amplification of quantum information carrying cat states in  Phys. Rev. A 92, 013826 (2015) and New J. Phys. 18 023028 (2016).

Wigner functions showing the evolution of the cavity state with (bottom) and without (top) the fluxonium qubit, along with fidelity F with the initial state (up to trivial rotations). Without the fluxonium, the self-Kerr induced by the transmon goes through a full revival of the state, via various coherent state superpositions and other nonclassical states. With the fluxonium, the state remains very close to the original coherent state with only small distortions appearing after 100 μs. 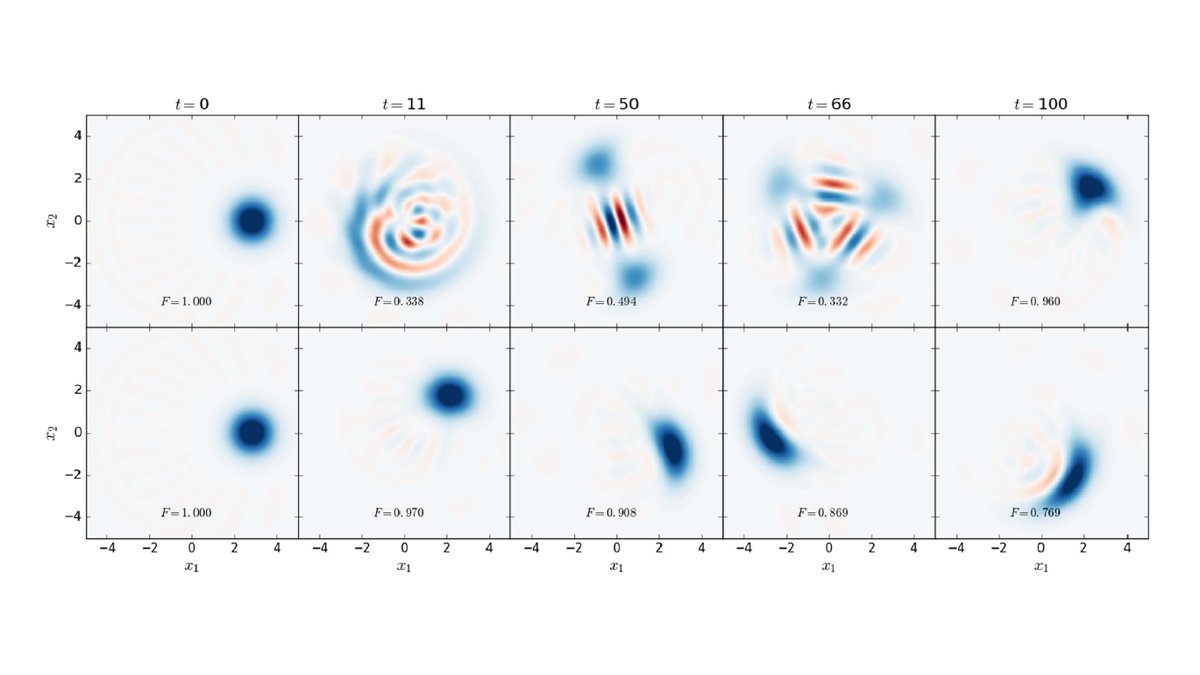