The Disaster Monitoring Constellation is an international collaboration of several countries each contributing a satellite to the constellation and sharing the data built by Surrey Satellite Technology Ltd with Surrey Space Centre inputs in astrodynamics.The original DMC partners were Algeria (AlSat), Turkey (BilSat), Nigeria (NigeriaSat) and the UK (UKDMC). A fifth satellite, Beijing-1, was launched by China in 2005.

The delay between the launches required good modelling of the orbit of AlSat to feed into the launch parameters for the rendez-vous satellites. The success of the DMC mission is reliant on the accurate phasing and constellation acquisition of the satellites which was achieved during 2003-04.

Due to problems on the upper stage of the launcher, AlSat was inserted into an orbit that was too high. The error in the sma was about 30km which not only caused the period to be incorrect, but also led to evolution of the local time at the ascending node (LTAN). As a result AlSat expended about 17m/sec of its fuel budget to correct the sma.

The constellation modelling had to take account of the Earth’s geopotential, the gravitational influences of the Sun and Moon and atmospheric drag. Radiation pressure forces were very small as the satellites only have a small surface area. The epicycle model was used for the planning as the satellites can determine their epicycle elements onboard from GPS data and this gives a good model for predicting the secular evolution of the constellation.

The epicycle model, however, is not sufficiently accurate to determine the firing ΔV and the timing. For this a full numerical propagator based on the symplectic geometry of the orbital motion was used. As well as this model, the NORAD TLE representation was also used. While this is a less accurate model than either of the other two, it did provide the operators a means of maintenance of the constellation in the absence of GPS data should there be a parts failure.

A nominal trajectory was decided upon based on the user requirements and adapted with simulation of launch and operation scenarios. A priority was to minimise the propellant usage needed for constellation acquisition in order to maximise the life of the mission. A sequence of firings is then determined to optimise fuel usage and bring the satellites into the correct ltan, sma and inclination. This is shown below as a series of jumps in sma to increase the difference from the reference and then decrease it to bring the satellite into correct phase.

The modelling of the constellation requires the propagation of the relative motion between the satellites. When simulating the effects of the firing table the propagation has to be halted at the determined time and the ΔV applied. Propulsion parameters are updated in accordance with the observed effects upon the orbit parameters which then adjusts the firing durations.

Once the other satellites were launched in September 2003, AlSat had been brought to within 300m in sma of the rest of the constellation. On 27th October 2003 the satellite parameters were as follows. 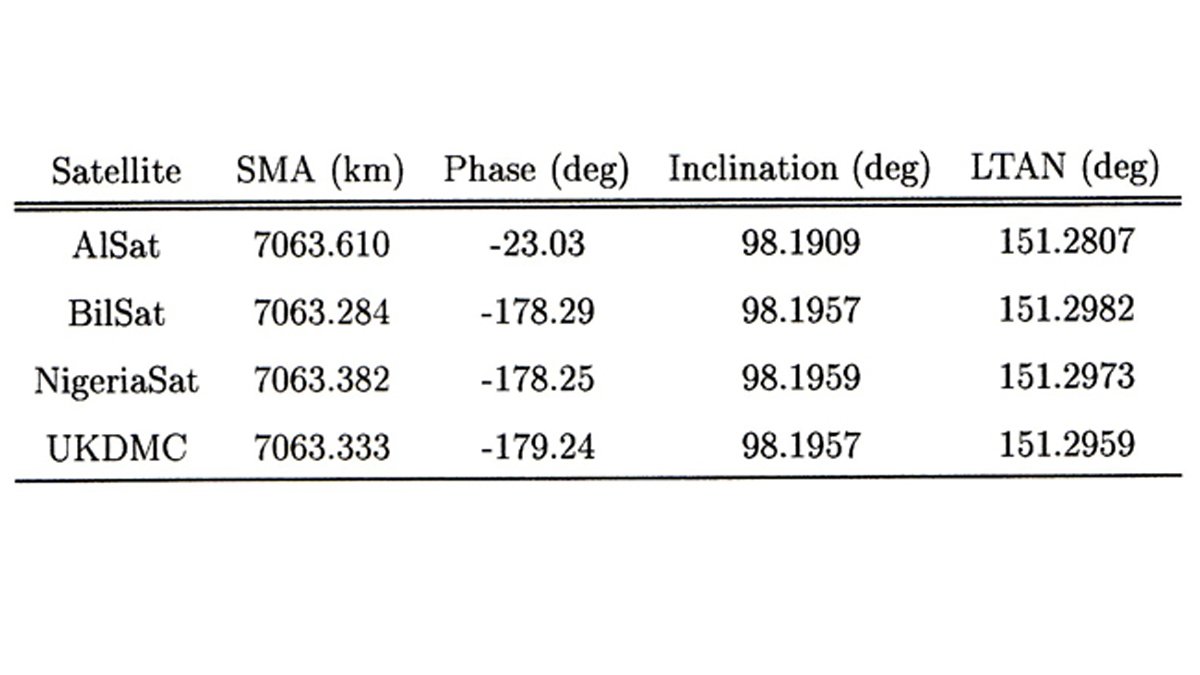 Since AlSat had already expended a considerable fraction of its fuel budget, it was decided to change the reference orbit to that of the AlSat satellite. This meant phasing the other 3 satellites in sma. The evolution is shown below:

The AlSat satellite starts the third one up. We see from the data that the semi-major axis is decreasing due to atmospheric drag. Nominally this is the same for all the satellites, but it is clear from this plot that there were variations. The NigeriaSat started with the highest sma and UKDMC the lowest in this plot. BilSat starts below AlSat but rises above it in the first set of firings. The slope of the decay in sma is shallower for BilSat as this satellite was more massive that the others and so the effect of drag was reduced. 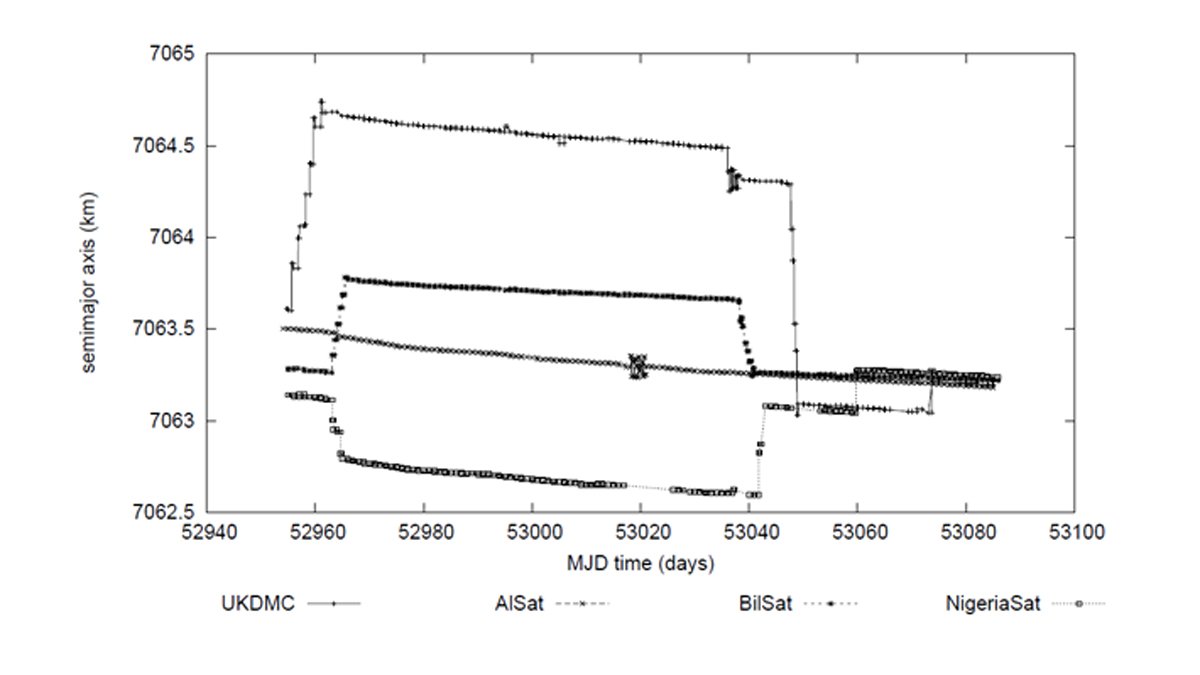 For NigeriaSat and AlSat there were cross-track firings to correct the inclination differences. These appear as a set of bunched changes in the sma plot at MJD 53020 and 53040. AlSat still had to make cross track firings as otherwise the difference in LTAN would lead to AlSat drifting in ascending node away from the rest of the constellation. This is shown in the figure below. The mission was designed to last 5 years and the requirement was that all the satellites would be in a 10AM sun-synchronous orbit with a 30 minute margin. The plot below shows AlSat leaving this window 3 months before the end of the mission.

Problems were encountered in the groundstation software that interrupted the second stage of firings on NigeriaSat and UKDMC. This can be seen where UKDMC starts to increase its sma in 53040 (6th February 2004) and then stops. Similarly NigeriaSat starts to drop its sma and stops just after the inclination corrections. 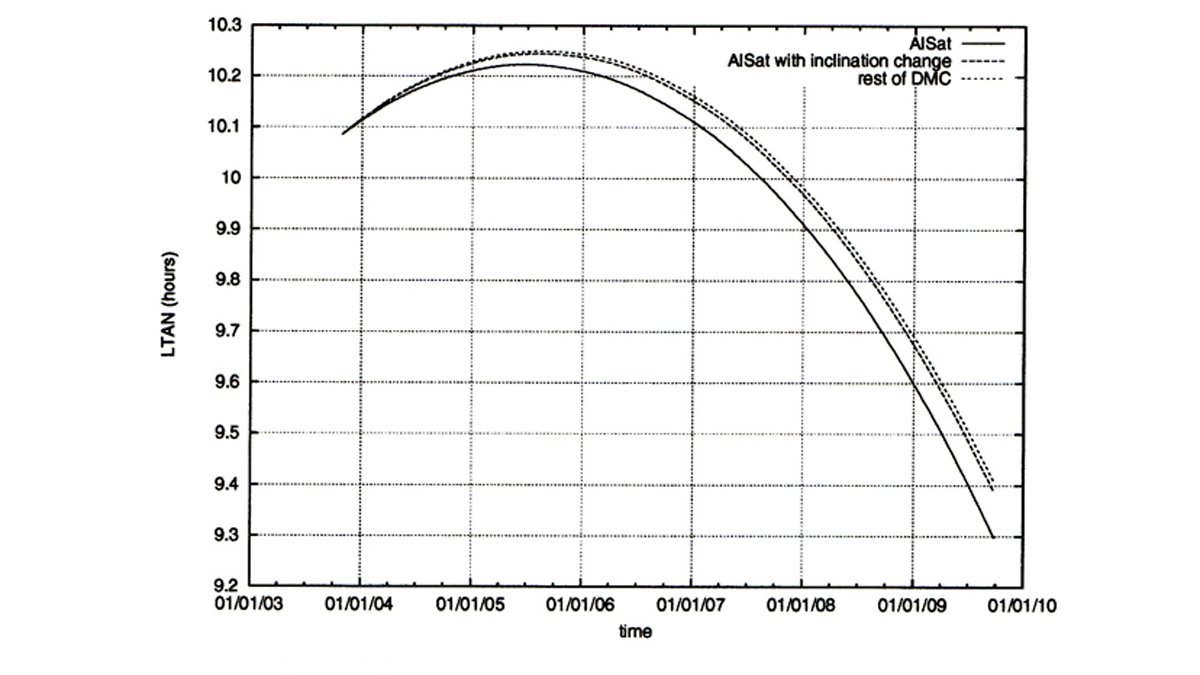 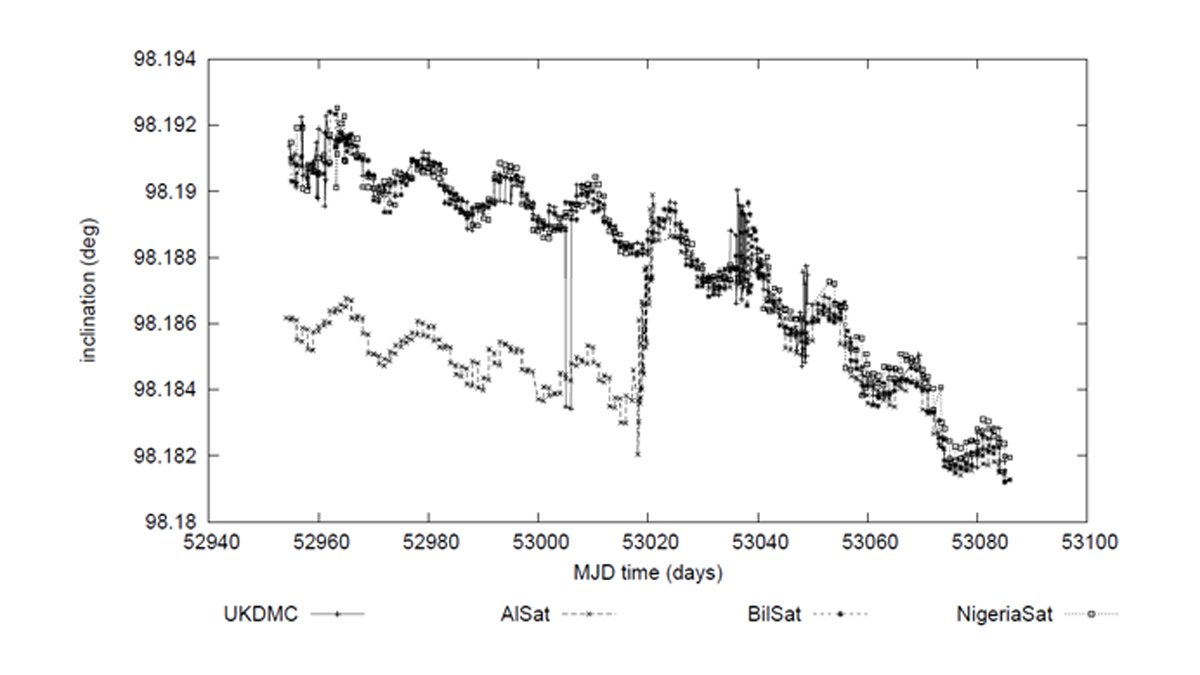 The inclination changes are shown here. The consortium decided not to correct for the differences.

In inclination apart from AlSat that can be seen to join the others on day 53020 (16 January 2004). The spikes in the data are GPS errors rather than estimation errors as no estimator was being run at the time. The periodic oscillation and general decline of the inclination is due to the gravitational attractions of the Sun and Moon upon the satellites.