We developed our own nanosatellite - SNAP, through a series of student research projects. A flight opportunity presented itself along with the launch of the Chinese microsatellite Tsinghua-1.

The Tsinghua-1 satellite was a 50 kg microsatellite that was carrying an experimental imaging system. SNAP, on the other hand, was a technology demonstrator satellite that could show a small 6.5 kg satellite capable of three axis pointing, having its own GPS navigation system and a small butane based propulsion system.

The opportunity afforded by the dual launch of these two satellites allowed the Astrodynamics group to consider a rendezvous experiment where the SNAP satellite could use its propulsive capability to catch up with the Chinese microsatellite and image it from close proximity using its novel CMOS based vision system.

The two satellites were launched in June 2000 on a Russian launcher. Shortly after separation the SNAP vision system automatically imaged the launcher and Tsinghua-1 microsatellite, which was still attached. This launch date was around the time of Solar maximum, and so we anticipated a significant atmospheric drag on the satellites. Since SNAP was so much lighter, there was a differential loss in altitude of the nanosatellite which also needed to be compensated for by the propulsion system.

This would be a world first demonstrating formation flying and proximity manoeuvres between two satellites in orbit. While there had been much interest in the possibility of satellites orbiting together, a demonstration of the technology was yet to be made.

This had the effect of altering the relative orbits of the two satellites as part of their ejection velocity was in the radial direction rather than the along track direction.

Unfortunately, upon separation it transpired that the nanosatellite separated into a slightly lower altitude orbit than the Tsinghua-1 microsatellite. SNAP being at 7072.8km and Tsinghua at 7074.4 km. This exacerbated the differential drag between the satellites.

It also quickly became evident that the nanosatellite had a residual magnetic moment that locked it into a rotation that followed the Earth's magnetic field lines. To fire the thruster in the along track direction meant having time to fire the thruster as the nanosatellite passed over the equator, severely limiting the opportunities for orbit change.

Even so it became possible to reverse the drift between the two satellites and the autonomous system was bringing SNAP closer to Tsinghua with an anticipated rendezvous in February 2001. In order to facilitate the proximity flying of the two satellites, to be restricted to around 2 km separation, the nanosatellite also carried an intersatellite receiver which would enable it to pick up the telemetry transmission from the Chinese microsatellite. This microsatellite was to be purely passive and not participate in the experiment at all.

Using the intersatellite link would enable SNAP to combine GPS signals from the two satellites and eliminate a number of principal error sources. From the combined GPS data it could then determine its relative orbit to the microsatellite, which it would use for the proximity operations. 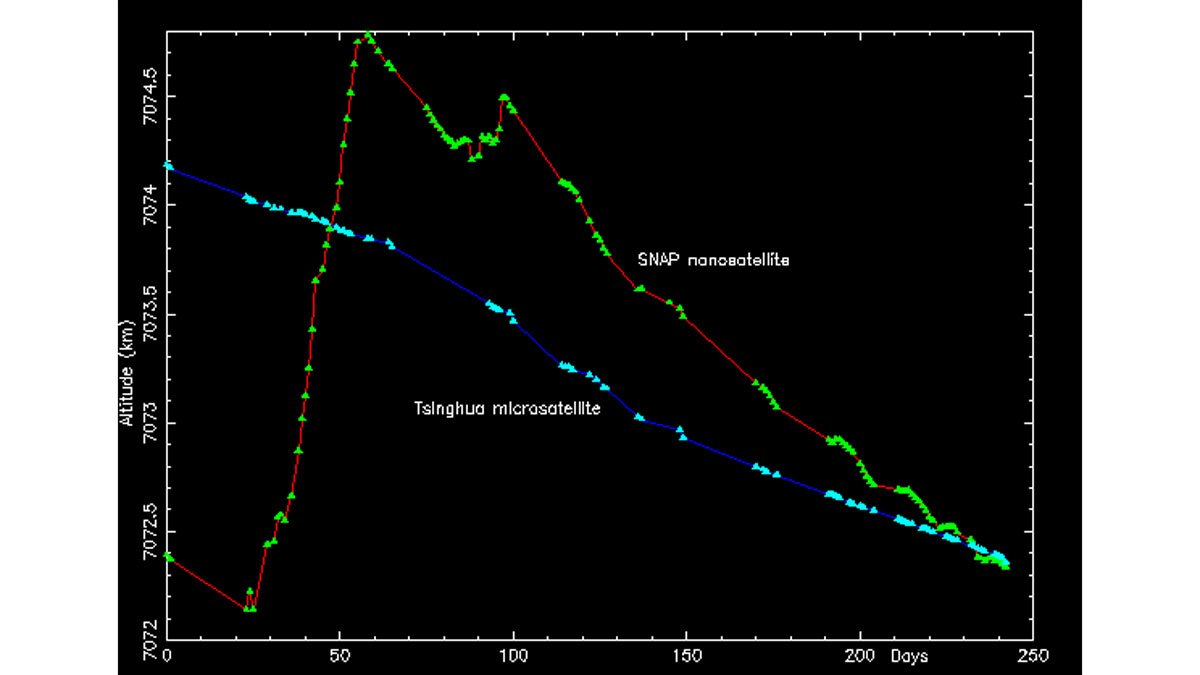 Unfortunately, the experimental propulsion system on SNAP exhausted its propellant tank before the rendezvous could take place and there was no longer any means of sustaining SNAP's orbit. The differential drag then caused SNAP's altitude to drop relative to that of Tsinghua and the satellites started once again to recede from each other.

Further information can be found on our Astrodynamics page.