InflateSail is primarily intended as a satellite de-orbiting device. Its purpose is to provide a viable means of removing satellites from orbit once the satellites have reached the end of their service lives.

The original InflateSail proposal was for a large drag sail based on a gas generator system, and ultra thin inflatable booms for structural support. The intention was to build a drag sail that would fit in a three unit (3U) CubeSat (satellite platform/nanosatellite) when stowed. The standard 3U structure size is 10x10x34 cm. Find out more about sails in space.

Inflatable structures make an attractive option for space applications because they can be lightweight due to their incredibly thin sail membranes, can be stowed in a relatively small volume, and can be expanded to fill a relatively large volume. To efficiently package sails, engineers have drawn inspiration from a variety of sources, including nature and the art form of origami. Find out more about folding solar sails.

Why it is needed

Satellites orbiting in the thermosphere, experience tiny amounts of drag as they collide with the small numbers of atmospheric molecules present at very high altitudes. The number of atmospheric molecules present in the thermosphere varies greatly under the influence of temperature and solar activity fluctuations. Over time, satellites impart enough energy to the molecules they encounter atmospheric entry; burning up in the process. The slow process of momentum loss, leading to atmospheric entry, can take many years. Decommissioned satellites in orbit can pose a threat to both manned and unmanned spacecraft.

By increasing the projected frontal area of the satellite, InflateSail will accelerate the process of momentum transfer from the satellite to the thin atmosphere, dramatically reducing the time a decommissioned spacecraft spends in orbit. It will consist of a series of inflatable booms, which act as a supporting truss for a very thin sail, or membrane.

The source of inflation gas for Inflatesail will be small devices called Cool Gas Generators, provided by TNO and CGG Technologies. The gas (most likely Nitrogen) is stored in a solid state, before being released on cue in an uncontrolled decomposition which delivers a specific quantity of gas.

Eventually, the gas used to inflate the structure will escape. Reasons for loss of pressure include small pinholes introduced into the structure's membrane during folding and storage, and impacts with small pieces of debris and micro-meteors. Once internal pressure has been lost, it is important that the structure maintain its shape in order that it may continue to serve its purpose.

Some proposed methods for performing rigidisation in space are:

Of these methods, only mechanical rigidisation has been demonstrated in space, and so appears to be the most promising option for Inflatesail. The process of material yield rigidisation involves inflating a polymer-metal laminate such that its ductile metal component is strained just beyond the point of plastic deformation. This removes imperfections in the previously folded membrane, and increases structural rigidity once internal pressure has been lost.

The main concern of the Large Deployable Technologies for Space (DEPLOYTECH) project, was to increase the technology readiness level (TRL) of the three deployable space structure concepts in order to address the need for greater competence in manufacturing and testing capabilities in Europe.

The technologies that were developed and flight qualified as part of the project were:

The solar sail boom was made of carbon fibre reinforced plastic (CFRP), and consisted of two co-bonded half shells to give a closed cross section.

The three concepts involved in this project were further developments of existing technologies, rather than technologies that had to be developed from scratch. The effort needed to raise the TRL of deployable CFRP booms, inflatable structures and deployable solar arrays was considered to be achievable and realistic. The applicability of these concepts was also in line with the current demand for space deployable structures and each concept fulfils an existing and growing need.

The availability of upcoming flight opportunities added an exciting dimension to the project. In order to raise the TRL's to maximum level, demonstration of operation in space was a necessity. The timing of these concepts and the targeted flight opportunities were ideally placed to achieve this.

The DEPLOYTECH project involved eight European partner institutions, and was assisted by NASA Marshall Space Flight Center (as an external consulting partner). The project was funded by the European Commission through the Seventh Framework Programme (FP7).

As part of their involvement in DeployTech, NASA Marshall Space Flight Center has compiled an interactive document (PDF) detailing many of the large deployable technologies created to date.

One of the boom designs under consideration for the DEPLOYTECH project is the Conical Boom concept. In their deployed state, these booms are thin-walled, slightly tapered cylinders. The taper allows the cylinder to be folded inside-out repeatedly without difficulty. The internal folding greatly shortens the boom, allowing it to be stored in a small space. When inflation gas is introduced into the base of the folded boom, skin friction causes the boom to deploy in a controlled manner. 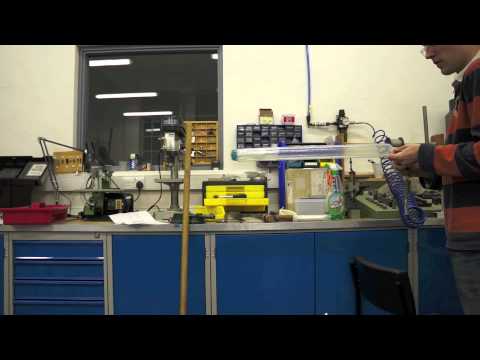 An early test on a small scale of a conical boom.

The early spherical inflatable satellites were experiments in satellite triangulation and passive communication. Their large, metal-coated surfaces were reflective to a broad range of frequencies, and were often clearly visible in the night sky. These early missions illustrate the types of applications for which inflatables are well suited: large, lightweight, and with low structural loads.

The significant challenges involved in producing a reliably deployable inflatable structure limit the range of practical geometries which can be employed. This is reflected in the types of structures which have been launched to date. Specifically, deployed shapes are usually limited to spheres and cylinders (a notable exception being the lenticular inflatable reflector of L'Garde's Inflatable Antenna Experiment).

Just like a regular balloon, the inflation gas used to drive inflatable structure deployment eventually escapes. When it does, the structure will lose its rigidity unless its skin is rigidizable. Some of the inflatables launched to date have been rigidizable, while others have not. A great many methods of rigidization have been proposed, but only two have actually flown: stretched metal laminates, and Sub-Tg (glass transition) resins.

Metal laminate skins consist of very thin layers of metal foil (usually aluminium) bonded to similarly thin layers of polymer. Once a metal laminate inflatable structure has been deployed, it is slightly over-inflated, causing the metal in the skin to strain harden and the surface to become very smooth. The resulting structure remains rigid after the escape of the inflation gas. Missions making use of stretched metal laminate rigidisation include Echo II and Explorer IX and XIX.