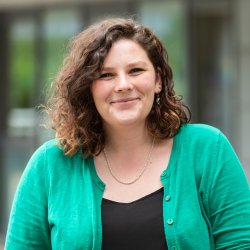 Enveloped viruses exploit cellular trafficking pathways for their morphogenesis, providing potential scope for the development of new antiviral therapies. We have previously shown that herpes simplex virus 1 (HSV1) utilizes recycling endocytic membranes as the source of its envelope, in a process involving four Rab GTPases. To identify novel factors involved in HSV1 envelopment, we have screened a small interfering RNA (siRNA) library targeting over 80 human trafficking proteins, including coat proteins, adaptor proteins, fusion factors, fission factors, and Rab effectors. The depletion of 11 factors reduced virus yields by 20- to 100-fold, including three early secretory pathway proteins, four late secretory pathway proteins, and four endocytic pathway proteins, three of which are membrane fission factors. Five of the 11 targets were chosen for further analysis in virus infection, where it was found that the absence of only 1, the fission factor CHMP4C, but not the CHMP4A or CHMP4B paralogues, reduced virus production at the final stage of morphogenesis. Ultrastructural and confocal microscopy of CHMP4C-depleted, HSV1-infected cells showed an accumulation of endocytic membranes; extensive tubulation of recycling, transferrin receptor-positive endosomes indicative of aberrant fission; and a failure in virus envelopment. No effect on the late endocytic pathway was detected, while exogenous CHMP4C was shown to localize to recycling endosomes. Taken together, these data reveal a novel role for the CHMP4C fission factor in the integrity of the recycling endosomal network, which has been unveiled through the dependence of HSV1 on these membranes for the acquisition of their envelopes. IMPORTANCE Cellular transport pathways play a fundamental role in secretion and membrane biogenesis. Enveloped viruses exploit these pathways to direct their membrane proteins to sites of envelopment and, as such, are powerful tools for unraveling subtle activities of trafficking factors, potentially pinpointing therapeutic targets. Using the sensitive biological readout of virus production, over 80 trafficking factors involved in diverse and poorly defined cellular processes have been screened for involvement in the complex process of HSV1 envelopment. Out of 11 potential targets, CHMP4C, a key component in the cell cycle abscission checkpoint, stood out as being required for the process of virus wrapping in endocytic tubules, where it localized. In the absence of CHMP4C, recycling endocytic membranes failed to undergo scission in infected cells, causing transient tubulation and accumulation of membranes and unwrapped virus. These data reveal a new role for this important cellular factor in the biogenesis of recycling endocytic membranes.