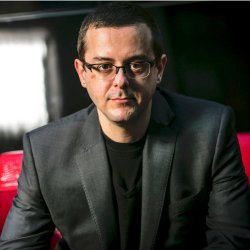 Lecturer in Entrepreneurship and Innovation
dp0026@surrey.ac.uk

David is an adaptive media researcher and entrepreneur. In his early career and doctoral work, he looked to computational intelligence, in particular genetic co-evolution, to create reflexive media systems that imitated and queried the nature of human creativity.He created the first European merger for Open Source startups and helped the National Health Service deploy the first mobile application to let users self-report in chronic illness.He has given papers and performances at the International Computer Music Conference, the European Conference on Artificial Life, IRCAM, the Darwin Symposium, and the Computer Arts Society in London, and more recently, has published on human emotion in play (affective modelling for games) in IEEE Computational Intelligence transactions and the International Conference on Creative Computing proceedings.His teaching focuses on software and hardware practices for digital media and core practices in Open Source and Open Innovation within startup culture.His industrial work, which has focused on creating mobile applications for self-reporting and behaviour change in mental health, is now focused on biobeats.com, a startup in San Francisco/London/Pisa that builds artificial intelligence solutions for large health platforms, including projects that address how decentralized digital currencies could offer derivative exchange value in health insurance for an individual's biometric data.

Background: The speed of physiological recovery from stress may be a marker for cardiovascular disease risk. Stress management programs that incorporate guided breathing have been shown to moderate the stress response and augment recovery.

Objective: The aim of this study was to examine the effectiveness of an app-based brief relaxation intervention (BioBase) for facilitating physiological recovery in individuals exposed to a brief psychological stressor.

Methods: A total of 75 participants (44 women) completed a stressor speech task and were randomly assigned to one of three conditions: control, rumination, or an app-based relaxation breathing (BioBase) conditions. Heart rate variability (HRV) was assessed as a measure of autonomic function at baseline (6 min), during stress (6 min), and during recovery (6 min).

Results: There was a significant increase in subjective stress following stress exposure, but the ratings returned to baseline after recovery in all three groups. In addition, there was a significant decrease in vagally mediated HRV in the poststress period. During recovery, the root mean square of successive differences (PÂ.001), the percentage of successive interbeat (RR) intervals that differ by Ã50 ms (pNN50; PÂ.001), and high-frequency (PÂ.02) HRV were significantly higher in the BioBase breathing condition than the rumination and control conditions. There was no difference in HRV values between the rumination and control conditions during recovery.