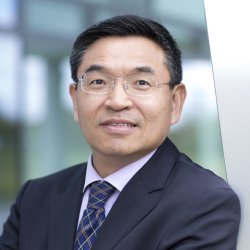 Professor Max Lu has been President and Vice-Chancellor of University of Surrey since April 2016. His responsibility is to lead the University, define its academic direction and strategy, and ensure that it is well managed.

Previously he was Provost and Senior Vice-President at the University of Queensland, Australia. He is a member of the Prime Minister’s Council for Science and Technology, and serves as Director of the Boards of UK Research and Innovation and National Physical Laboratory, and as a member of the Leadership Council of the National Centre for Universities and Business.  He is a Deputy Lieutenant of Surrey and active in many local arts, charitable and community organisations.

Professor Lu lectured at Nanyang Technological University from 1991 to 1994, and held academic and leadership positions at the University of Queensland from 1994 to 2016, rising from senior lecturer to chair professor. He founded the Australian Research Council's Centre of Excellence for Functional Nanomaterials and served as its inaugural director for eight years. He was awarded the Australian Research Council Federation Fellowship in 2003 and 2008.

As a double Highly Cited Researcher in both Materials Science and Chemistry he has published over 500 journal papers on nanomaterials (h=128 and over 66,800 citations @Scopus). He is co-inventor of more than 20 granted international patents.  He has been honoured with numerous awards including Orica Award, RK Murphy Medal, Le Fevre Prize, ExxonMobil Award, China International Science and Technology Award, Japan Chemical Society Lecture Award, Chemeca Medal, and P.V. Danckwerts Lecture. He was also recently honoured with a Medal of the Order of Australia (Officer in the General Division) for his distinguished service to education and international research in the field of materials chemistry and nanotechnology, to engineering, and to Australia-China relations.

History made as Surrey’s first cohort of veterinary students graduate

The Eagle has landed in the Guildford Roll of Honour

New student accommodation ‘topped out’ by the Mayor

Gold award marks the University of Surrey as an ‘outstanding’ institution