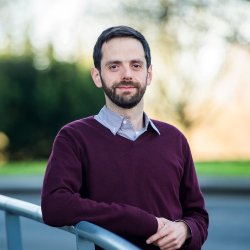 Please have a look at my website here for further details.

I started my research career with a PhD on theoretical nuclear physics at the University of Barcelona (2007). I was hired as a postdoctoral research fellow (2007-2009) at the National Superconducting Cyclotron Laboratory (Michigan State University, USA) to work alongside Prof Pawel Danielewicz. I moved to Surrey in 2009 with an EU Marie Curie Fellowship. In 2011, I was awarded a 5-year STFC Advanced Fellowship to continue advancing new methods for nuclear theory. I became a Lecturer at Surrey in 2015.

I lead developments in many-body Green’s functions techniques for over a decade, in collaboration with groups at Barcelona & St Louis. I am also engaged in work at the nuclear structure and reactions levels, using time-dependent density functional techniques to study fission and fusion. My predicitions for neutron-star pairing gaps and equation of state have been used in astrophysical publications.

My research is at the forefront of nuclear theory and attempts to understand the emergent properties of atomic nuclei from its basic constituents – neutrons and protons. The methods I have developed over the 15 years of my research career have implications for experimental research at facilities worldwide, for astronomical observations (e.g. GW170817, the recent multimessenger binary neutron star inspiral) and for practical applications (like fission processes in nuclear reactors).

I specialise in self-consistent Green’s functions (SCGF) techniques, but I also have demonstrated expertise in density functional techniques. During my PhD thesis, I reviewed a series of problems in dense nuclear matter, ranging from ferromagnetism to hyperonic matter. As a postdoctoral researcher at Michigan State University, I developed a time-dependent Green’s functions program in  (ongoing). I obtained a Marie Curie Fellowship at Surrey to develop predictions for correlated nuclear systems to be tested in experiments. My 5-year STFC Advanced Fellowship allowed me to establish a research program tying up correlated time-dependent and equilibrium nuclear properties.

An accurate determination of the core-crust transition is necessary in the modelling of neutron stars for astrophysical purposes. The transition is intimately related to the isospin dependence of the nuclear force at low baryon densities

To study the symmetry energy and the core-crust transition in neutron stars using the finite-range Gogny nuclear interaction and to examine the deduced crustal thickness and crustal moment of inertia. Methods: The second-, fourth- and sixth-order coefficients of the Taylor expansion of the energy per particle in powers of the isospin asymmetry are analyzed for Gogny forces. These coefficients provide information about the departure of the symmetry energy from the widely used parabolic law. The neutron star core-crust transition is evaluated by looking at the onset of thermodynamical instability of the liquid core. The calculation is performed with the exact Gogny EoS (i.e., the Gogny EoS with the full isospin dependence) for the ²-equilibrated matter of the core, and also with the Taylor expansion of the Gogny EoS in order to assess the influence of isospin expansions on locating the inner edge of neutron star crusts.

The properties of the core-crust transition derived from the exact EoS differ from the predictions of the Taylor expansion even when the expansion is carried through sixth order in the isospin asymmetry. Gogny forces, using the exact EoS, predict the ranges 0.094 fm?3 . Át . 0.118 fm?3 for the transition density and 0.339 MeV fm?3 . Pt . 0.665 MeV fm?3 for the transition pressure. The transition densities show an anticorrelation with the slope parameter L of the symmetry energy. The transition pressures are not found to correlate with L. Neutron stars obtained with Gogny forces have maximum masses below 1.74Mý and relatively small moments of inertia. The crustal mass and moment of inertia are evaluated and comparisons are made with the constraints from observed glitches in pulsars.

The finite-range exchange contribution of the nuclear force, and its associated non-trivial isospin dependence, is key in determining the core-crust transition properties. Finite-order isospin expansions do not reproduce the core-crust transition results of the exact EoS. The predictions of the Gogny D1M force for the stellar crust are overall in broad agreement with those obtained using the Skyrme-Lyon EoS.