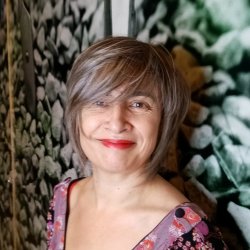 I am Senior Lecturer in Translation and Multimodal Technologies the Centre for Translation Studies at the University of Surrey.

My research focuses on the impact of language in human computer interaction, translation technology (CAT, machine translation), technology and creativity in translation, and translation training. I have worked in projects covering the following areas:

Video: Dr Ana Guerberof-Arenas’ on “Can machines be creative in literary translation?” at Trinity College (Dublin)

The Centre for Translation Studies well represented at EAMT 2020

Since I began my research career in 2006 as part of the PhD programme led by Prof. Anthony Pym, I have been interested on translation and technology, and more specifically on how this technology impacts users. Initially, I was involved in empirical research that measure translators' productivity, quality and experience in post-editing and look at translators' perception of this technology.

As a logical step to further my research, I have looked at the ultimate user of translation. I have been involved in usability research that involved eye-tracking 84 users of Microsoft Word in Spanish, German, Japanese and English to determine if MT had an impact on users' efficiency, effectiveness and satisfaction.

At the same time and to continue this line of research, i.e. to explore human interaction with MT (and NMT), I have collaborated with Dr Sheila Castilho from the ADAPT Centre in Dublin City University, we looked at reading comprehension in Chinese and Spanish participants when the texts were translated using Neural and Statistical MT.

In parallel to this, I am interested to investigate the concept of creativity in relation with MT and in the context of literary translation. In collaboration with Dr. Antonio Toral (University of Groningen) I have been involved in an empirical project that looks at narrative engagement and reception in Catalan participants when reading translated texts using machine and human translation methods. The results from this research can provide data with regards to the extent that NMT can be used effectively to translate creative texts, and the impact that using NMT can have on the readers in terms of their engagement (that is strongly correlated to enjoyment).

Finally, I’m also collaborating with Drs. Antonio Toral and Antoni Oliver (from Universitat Oberta de Catalunya) in a project that uses NMT for the creation of bilingual books intended for helping people to read the original version of a novel.

Correlations between localization quality and usability on machine and human translated user interface strings: a study using eye-tracking and telemetry

I have participated in the following conferences as Keynote Speaker or Speaker:

I am interested in supervising PhD projects mainly in these areas:

From January 2020, I am co-supervising Jisue Park in her PhD thesis Metaphors in comic books from English into Korean: A study of translation process and final product using different translation modalities. University of Surrey.

From June 2020, I am co-supervising Juyuan Wang in her PhD thesis Design of augmented reading and writing experiences. University of Surrey.

From October 2020, I will be co-supervising Giulia Tarditi in her PhD thesis Translating without source texts: a study of the multilingual transcreation of mobile apps. University of Surrey.

From September 2019, I will be the co-supervisor for Ariana López Pereira in her PhD thesis Cognitive and professional aspects for the improvement of post-editing tasks. Supervisor Dr. Pilar Sánchez Gijón. Universitat Autònoma de Barcelona.

I am supervising Melanie Tse in her dissertation A comparative analysis of US English and Hong Kong Chinese subtitles of Parasite. University of Surrey (2019-2020).

I am supervising Rachel Pilley in her dissertation The transcreation of the “This Girl Can” website for a Latin American audience and its socio-political implications. University of Surrey (2019-2020).

I have supervised Aoife Skelly in her dissertation Women under Franco's Dictatorship: The translation of Betty Friedan's The Feminine Mystique into Spanish and Catalan. Graduate Dissertation. Dublin City University, Ireland. 05/2019

I have also given workshops and seminars on different topics such as post-editing, creative writing, and most recently on eye-tracking.

This article presents the results of a study involving the translation of a fictional story from English into Catalan in three modalities: machine-translated (MT), post-edited (MTPE) and translated without aid (HT). Each translation was analysed to evaluate its creativity. Subsequently, a cohort of 88 Catalan participants read the story in a randomly assigned modality and completed a survey. The results show that HT presented a higher creativity score if compared to MTPE and MT. HT also ranked higher in narrative engagement, and translation reception, while MTPE ranked marginally higher in enjoyment. HT and MTPE show no statistically significant differences in any category, whereas MT does in all variables tested. We conclude that creativity is highest when professional translators intervene in the process, especially when working without any aid. We hypothesize that creativity in translation could be the factor that enhances reading engagement and the reception of translated literary texts.

This paper presents results of the effect of different translation modalities on users when working with the Microsoft Word user interface. An experimental study was set up with 84 Japanese, German, Spanish, and English native speakers working with Microsoft Word in three modalities: the published translated version, a machine translated (MT) version (with unedited MT strings incorporated into the MS Word interface) and the published English version. An eye-tracker measured the cognitive load and usability according to the ISO/TR 16982 guidelines: i.e., effectiveness, efficiency, and satisfaction followed by retrospective think-aloud protocol. The results show that the users’ effectiveness (number of tasks completed) does not significantly differ due to the translation modality. However, their efficiency (time for task completion) and self-reported satisfaction are significantly higher when working with the released product as opposed to the unedited MT version, especially when participants are less experienced. The eye-tracking results show that users experience a higher cognitive load when working with MT and with the human-translated versions as opposed to the English original. The results suggest that language and translation modality play a significant role in the usability of software products whether users complete the given tasks or not and even if they are unaware that MT was used to translate the interface.