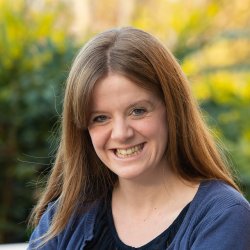 Faculty of Arts and Social Sciences, School of Literature and Languages.

My research interests lie primarily in contemporary Iberian literary and cultural studies, with a focus on Galician Studies, translingual migration literature and writing by women. I also have keen interests in Comparative Literature and multilingualism in education.

I am currently Principal Investigator on the bilateral, multidisciplinary research network 'Women's (Im)Mobility in Times of Crisis' / 'A (I)Mobilidade das Mulheres em Tempo de Crise', a collaboration between the University of Surrey and the University of São Paulo funded by the University Global Partnership Network (UGPN).

My monograph Contemporary Galician Women Writers (Cambridge: Legenda, 2020) is the first analysis of contemporary novels published in Galician and Spanish by women writers with conflicting political and linguistic ideologies. I was recently co-editor of a special issue for the Journal of Romance Studies entitled 'Galician Mobilities: Revisiting Migration and morriña' , and with Danny Barreto (Colgate University, USA) I am currently guest editing an issue on gender and sexuality in Galician cultural production for the International Journal of Iberian Studies (publication spring 2022).

My latest book project explores the intersections of translingualism and feminism in texts by contemporary exophonic women writers publishing in Catalan, Galician and Spanish. This interest in literary translingualism informs empirical work with Karina Lickorish-Quinn (University of Leeds) on translingual creative writing in primary education.

I am an elected member of the executive committee of the Modern Language Association Galician Studies Forum.

I welcome inquiries from prospective PhD students in Iberian literary and cultural studies and Comparative Literature.  Particular interests include Galician Studies, writing by women, multilingual literature and literatures of migration.

I am currently on the supervisory team for:

Barbour C. (2020). Contemporary Galician Women Writers, Studies in Hispanic and Lusophone Cultures, 39 (Cambridge: Legenda).
View abstract View full publication
Galician literature has historically played an integral role in the consolidation of Galician identity. Yet female novelists writing in Galician have only managed to achieve visibility in the Galician cultural sphere as recently as the turn of the twenty-first century; their contemporaries who opt to write in Spanish, moreover, are entirely overlooked. This foundational study of contemporary narrative by Galician women in both languages examines the work of writers with disparate and often conflicting political and linguistic ideologies: Teresa Moure (b. 1969), Luisa Castro (b. 1966) and Marta Rivera de la Cruz (b. 1970). Catherine Barbour argues that the diverse manifestations of Galician identity in their novels, which defy institutional parameters in terms of language, politics and gender, suggest the need for a more porous understanding of Galician literature and identity that reflects the plurality of the Galician experience.
Alonso Alonso M. and Barbour C. (2020). 'Galicia on the Move', Journal of Romance Studies, vol. 20, no. 3, pp. 395-407. DOI: https://doi.org/10.3828/jrs.2020.22.
View full publication
Alonso Alonso M, Barbour C. and San Román G. (eds.) (2020). Special Issue: 'Galician Mobilities: Revisiting Migration and Morriña', Journal of Romance Studies, vol. 20, no. 3.
View full publication
Barbour C. and Lickorish Quinn K. (2020). 'Los pájaros are feliz and are dreaming about gwiazdy: Facilitating Translingual Creative Writing in the Primary Classroom', English in Education, vol. 54, no. 1, pp. 6-26. DOI: https://doi.org/10.1080/04250494.2019.1703553

View abstract View full publication
Although one in five state-educated children in England speak a language other than English at home, there is little space in the National Curriculum for the expression of this linguistic heritage. In this article we seek to make the case for facilitating multilingualism in the primary classroom through translingual creative writing, which involves mixing two or more languages. We draw on empirical research with a class of lower Key Stage 2 children of diverse linguistic backgrounds and abilities at a school in south London. The children were set the task of writing a poem that combined English with other languages so that we could observe how they engaged with the process of translanguaging. We suggest that translingual writing exercises in the classroom provide a range of benefits, including the creation of a space for the valorisation of children’s cultural capital; the facilitation of valuable peer-teaching and collaboration; freedom for children to explore playfulness with language; and a chance for them to experiment with and reflect on their creative writing processes.
Barbour C. (2019). 'Staking a Claim: Dispute, Displacement and Galician Identity in Marta Rivera de la Cruz's Hotel Almirante (2002)', Bulletin of Spanish Studies, vol. 96, no. 6, pp. 993-1014, DOI: https://doi.org/10.1080/14753820.2019.1613814
View abstract View full publication
This article interrogates the depiction of Galician identity in the Spanish-language novel (2002), by Marta Rivera de la Cruz, the Lugo-born writer, journalist and Ciudadanos politician whose role as a producer of Galician culture is widely contested owing not only to her linguistic practice, but also her dismissal of Galician nationalism and language policy. As might be expected, Rivera’s novel often tends towards a conservative, Spanish regionalist interpretation of her native culture that corresponds to her controversial public profile. Yet in spite of this, the writer stakes her claim to a Galician identity that challenges stereotypes in its treatment of issues of displacement, social mobility and female empowerment. It is argued that precisely because of her contentious politics, Rivera’s fiction must be confronted for the way in which it engages with, undermines and reconfigures contemporary understandings of Galician identity.
Hotel Almirante
Barbour C. and Lickorish Quinn K. (2019). 'Making Space for Multilingual Creativity', Educate, July/August 2019, p. 50.
View full publication
Barbour C. (2021). Review of The Routledge Handbook of Translation and Activism, edited by Rebecca Ruth Gould and Kayvan Tahmasebian. Journal of Specialised Translation, vol. 36, pp. 351-355.
View full publication
Barbour C. (2015). Review of Canon y subversión. La obra narrativa de Rosalía de Castro, edited by Helena González Fernández and María do Cebreiro Rábade Villar. Bulletin of Spanish Studies, vol. 92, no. 4, pp. 624-625.
View full publication
Barbour C. (2013). Review of Contemporary Galician Cultural Studies: Between the Local and the Global, edited by Kirsty Hooper and Manuel Puga Moruxa. Forum for Modern Language Studies, vol. 49, pp. 347-348.